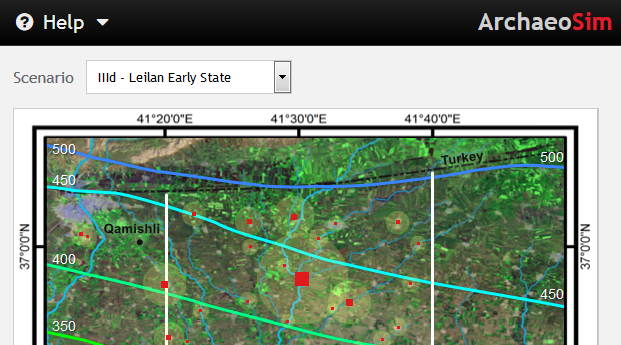 ArchaeoSim 4 is an HTML5 re-implementation of the original ArchaeoSim I implemented as a CourseWare Java applet a decade earlier for Harvey Weiss at Yale University.

ArchaeoSim explores social and environmental tradeoffs in the ancient farming civilization of ancient Subir (northern Mesopotamia). This is an individual-based simulator, with the settlements acting as the individuals. Students explore assumptions by setting parameters. The actual civilization was devastated by climate change in pre-history. This new version of ArchaeoSim uses a satellite image for the landscape map, and the latest archaeological evidence of settlement sizes and rainfall patterns.

ArchaeoSim 4 debuted for course use at Yale University in November 2014.